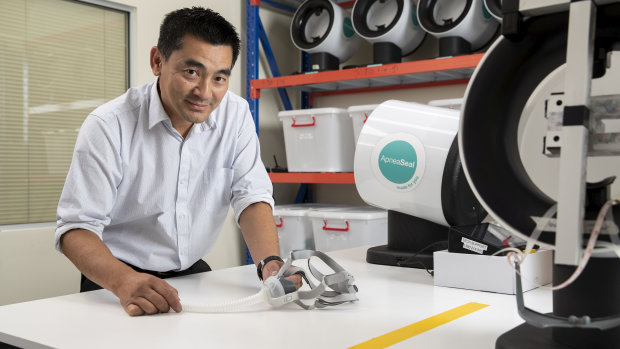 After more than two decades with global giant ResMed as head of technology, Phil Kwok turned his innovation nous to local medical technology company ApneaSeal, which is behind a personalised mask used to treat sleep apnoea.

While Mr Kwok does not expect the company to be profitable for another 12 months after launching its first product a month ago, its 3D-printing technology had already snared interest from global players, including the dual-listed ResMed.

Mr Kwok has three decades of experience in the sleep apnoea and respiratory devices fields and was one of the early staffers at ResMed. He is an inventor or co-inventor in over 1400 patent cases.

He believes ApneaSeal’s mask will be a global product, and he already has sights on filing with the US Food and Drug Administration next year.

“We have always thought about this product being a global product,” he said. “We operate under the mantra, ‘think globally, act locally’.

“I was at ResMed when it was smaller than where this company is now. What makes a great business is the culture and people. (ResMed founder Peter) Farrell always found the best people he could afford. He was big in academia.

“You never really know where you are going to get to, but companies that believe they can really change things out there is the common thread, and we have got the foundations of that.”

Five years of work has resulted in something that is potentially groundbreaking.”

Mr Kwok said the technology used is simple and scalable. It also helps to address one of the biggest issues facing patients suffering from sleep apnoea: compliance. Many patients discontinue therapy due to lack of comfort, which often is related to the mask.

“You have got to get people compliant,” he said. “Our biggest competitor is actually ignorance to sleep disorders. People get used to wearing a compromise.”

With the cost of healthcare sky-rocketing, Mr Kwok said failures with sleep apnoea masks costs both patients and insurers.

“To get this right from the get-go is potentially saving healthcare systems major costs,” he said.

So how does it work? Patients’ faces are scanned and the data is sent to ApneaSeal’s design engineers, which process it through cloud-based 3D modelling tools to make a custom-made nose mask. The process and delivery can be completed in a few days and can be sent directly to the patient – a benefit during COVID-19 as people would normally have to be fitted in person.

ApneaSeal sits under the Bespoke Medical Innovations umbrella, which is aiming to capitalise on the macro trend in customising medical devices. Its other business is orthopaedics, such as custom replacement knee joints.

“This is not easy to do. We take longer to put a new mask product out than a Korean car company takes to get a new model out,” he said. “Five years of work has resulted in something that is potentially groundbreaking.”

Mr Kwok said the company has a couple of groundbreaking ideas it is keen to introduce to the market including a full-face mask system that is currently under development. It is likely to seek additional funding for the full-face mask program.

ApneaSeal has also benefited from the federal government’s R&D tax incentive scheme. Proposed major cuts to the scheme were scrapped in October’s budget.